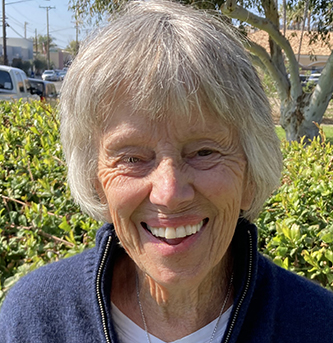 After getting her Masters’ Degree in Special Education Kay taught school in Ohio and Cambridge, Massachusetts where she and her husband lived for 6 years and where she became a strong advocate for the education of children with disabilities in integrated settings in public schools. When her husband finished graduate school in Cambridge, they moved to California, had two sons and she became Director of the Malibu Methodist Nursery School, serving as such for 39 years. During that time she again became an advocate for equity by making every effort to make the school available to all children and Families who were interested in their play based program regardless of circumstances.

She became involved in the unhoused population in Malibu when the school set up a “bring an item and take an item” program in a public space on their campus and she noticed that items were brought and traded during the evenings and weekends when the school was closed. A few dinners offered to anyone in the community soon became a regular event and a way to get to know those in need, build trust, show respect and be available if and when they needed help to change their circumstances. Soon with the help of Rev. Sandy Liddell and Carol Moss, Malibu CART (Malibu Community Assistance Resource Team) was born. The City of Malibu, local churches, public schools and Pepperdine stepped in. Outreach workers were hired to reach out to each valued member of the unhoused community, a Task Force was formed to determine

Malibu’s role in sharing the statewide resolve to give a leg up to those who are ready. Kay is a member of this Task Force and has served on the Board of the Malibu Community Labor Exchange for the over 8 years and is proud of the work they have been able to accomplish recently to help their worker/clients through Pandemic times when many of them remain in need of work to support their families. Kay has been married to her husband Bryan for 56 years (and counting!); they have two sons and seven grandchildren. She is grateful for their support and love in all endeavors and is proud to be a member of the Malibu Community who counts among its many attributes compassion, generosity and a respect for the humanity of all people.